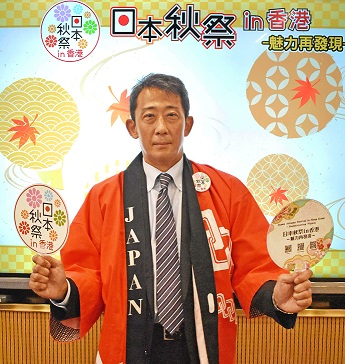 
Hong Kong is an important partner with which Japan has close economic relations and person-to-person exchanges. This relationship is underpinned by the mutual understanding and trust between the two places.

Secondly, Hong Kong is the largest export market for Japan’s agricultural, forestry and fisheries products. Not only do Hong Kong people like Japanese food, but they also drink more sake than Japanese people when they eat Japanese food. This is a sign that they really understand Japanese food culture.

Thirdly, there are close ties between Hong Kong and Japan in the fields of academia and culture. The member organisations of the Japan Autumn Festival’s Executive Committee have worked together with the people of Hong Kong to implement various exchange projects. We, representing Japanese companies and the Japanese community, are very grateful to Hong Kong people for their deep understanding of Japanese food as well as Japanese culture.

In spite of the COVID-19 pandemic, Hong Kong provided great support to the host country of the Olympic and Paralympic Games, Japan, when the competitions were being held. I hope that the “Japan Autumn Festival in Hong Kong” 2021 will build on the momentum created by the Tokyo Olympics and Paralympics, and further strengthen the future partnership between Japan and Hong Kong. I look forward to welcoming you to our events.

Finally, I would like to, once again, thank all the event organisers and our Hong Kong friends who will be attending the events. Next time, I hope to see you all at the events.

Thank you very much.